The highly anticipated Sony FR7 is almost here, and we’ve been able to get an early hands-on experience, courtesy of Sony Professional Europe!

At IBC 2022 back in September, Sony announced the launch of the FR7, the world’s first ever PTZ camera that combines a full-frame image sensor, lens interchangeability and remote shooting functionality. The announcement rocked the industry and was one of the most talked about subjects at the four-day show.

The FR7 being demonstrated by Sony at IBC 2022 in September

The FR7 took the industry by storm in a number of ways, particularly due to it being the world’s first full-frame PTZ camera that lets you switch lenses – completely redefining the creative and cinematographic possibilities of live events, reality TV and fixed rig productions!

The evidence of the FR7’s cinematic capabilities doesn’t end there. In early December it was announced that the FR7 had been added to the Netflix approved camera list, making it the first PTZ to be approved as a primary camera within Netflix productions.

As with the Sony FX6, the FR7 also features a built-in variable ND filter which can be completely remotely controlled. The intensity varies from 1/4 to 1/128 with an automatic ND feature also available.

The Sony FR7 boasts a 12G–SDI BNC output that can be easily connected to the SDI input on the rear of the Quicklink ST150. The onboard RJ-45 (LAN network) connector for network communication allows the FR7 to be discoverable for remote control and integration within the Quicklink Manager. Also available is audio-in (5-pin XLR), timecode-in, and GPI.

After very little configuration, the pan/tilt/zoom, chromakey, focusing and other aspects could be controlled remotely using the Quicklink Manager. This is made possible through the Quicklink ST150’s support for any camera using the VISCA Protocol.

Sony FR7 being controlled from within the Quicklink Manager user interface

From the Quicklink Manager, selecting the Camera Settings opens the FR7 web application for advanced pan, tilt, zoom, focus and record control. From here, up to 100 camera position presets can be configured. Camera access is achieved using QRTP (Quicklink Reverse Tunneling Protocol) making the camera accessible anywhere even when behind NAT and firewalls with no configuration required. 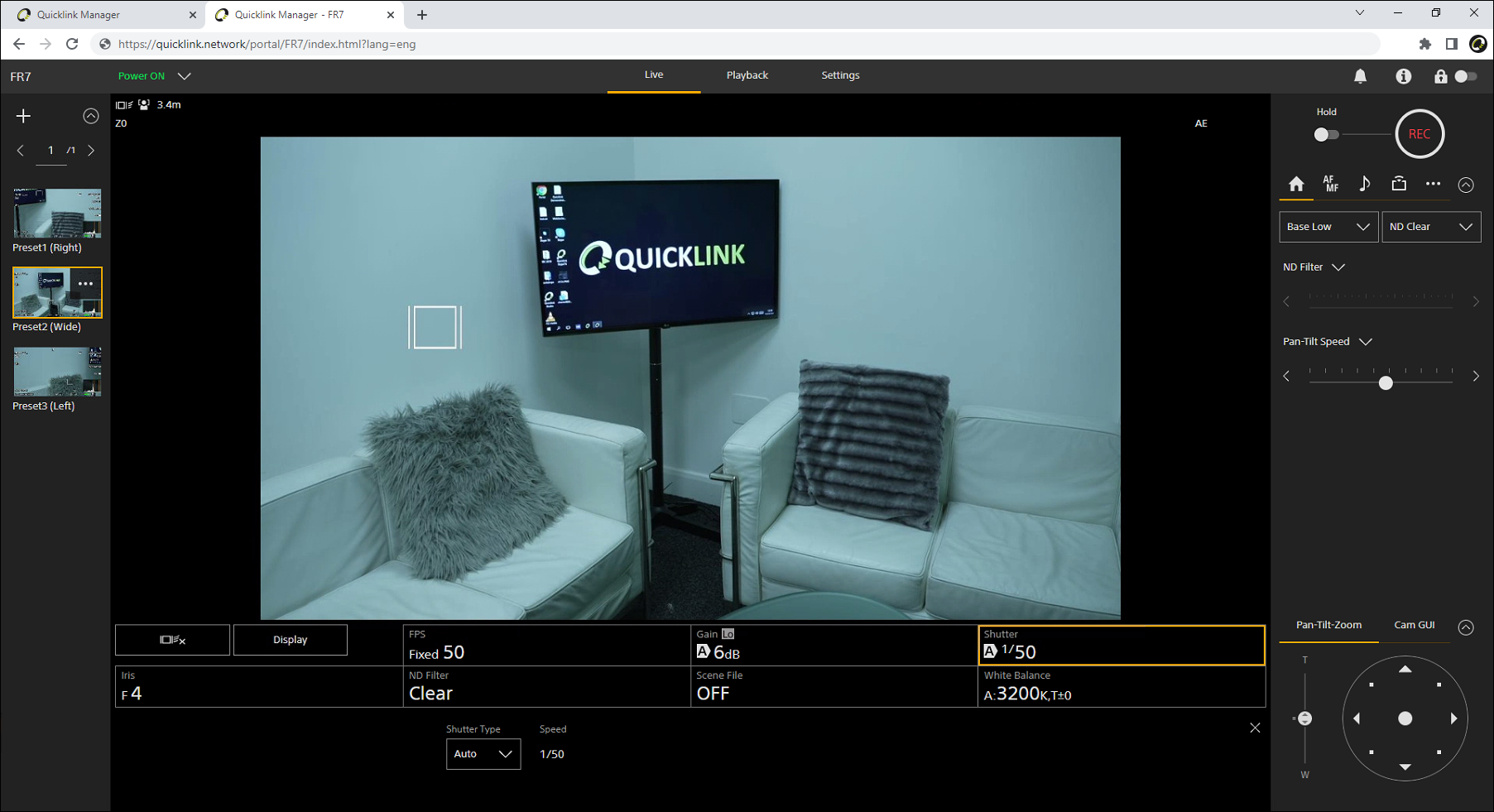 Once we have configured our shot setup, the Quicklink Manager can be used to manage virtual rooms to connect the Quicklink ST150, with incorporated FR7, to a Quicklink Studio Server (ST100, ST102, ST207, ST200) facilitating a high-quality two-way connection for broadcast output via HD-SDI, HDMI and IP (NDI, MPEG-TS).

For more of a hands-on control, the FR7 can be paired with a Sony RM-IP500 control panel, connected using Ethernet or GPI. The RM-IP500 includes physical controls for all essential functions of the FR7, such as a joystick for PT control, knobs for zoom, focus, ND filter and more.

After spending a significant amount of time using the Sony FR7, here’s our thoughts summarised…

The Sony FR7 has taken the industry by storm and has re-written the possibilities of PTZ cameras and their place within professional productions. With the cinematic look and feel becoming increasingly the norm in broadcasting, the FR7 certainly brings the PTZ camera into the cinematic realm as claimed by Yang Cheng, Vice President, Imaging Solutions at Sony Electronics Inc.

The combination of the full-frame image sensor and lens interchangeability options make the Sony FR7 an exceptionally impressive piece of kit. We are certainly extremely excited to see the professional remote contributions and remote production workflows using the Sony FR7 and ST150, controlled using the Quicklink Manager without the need for network configuration.

Leave your details, and our dedicated team will be in touch!